Written by David Quinn on September 21, 2014. Posted in Media

Auction action: A 1960 guitar with a D.C.- area history fetches a pretty penny

Lots of people figured the 54-year-old Gibson Les Paul electric guitar would fetch more than its $20,000 to $30,000 pre-auction estimate, but no one knew how much more.

The answer: a lot. Two Saturdays ago, Gil Southworth Jr. paid $140,000 for the guitar I wrote about recently. Add in the premium paid to Quinn’s Auction Galleries in Falls Church and the price tag came to $165,200. Why, with that money, Gil could have bought 1,652 brand-new $100 ukuleles (a sobering thought).

Gil is from Bethesda. He’s a guitar dealer, owner of Southworth Guitars, which had a shop on MacArthur Boulevard and then Old Georgetown Road before moving to the Web. His customers have included Eric Clapton, George Harrison and Tom Petty.

“I’ve bought and sold almost 100 original Sunburst Les Pauls, but I’m a nut for them, too,” said Gil, 58. “I’m my own worst customer, being a collector-dealer. I could probably sell this guitar right now and make a good piece of change on it. But I’m paralyzed by the terrifying beauty of it. My intention is to keep it.”

Gil said he was drawn to this one for a couple of reasons. It’s actually painted in “chocolate sunburst” colors, a rarer finish than regular sunburst. More importantly, it’s an exceptionally local guitar: purchased for $320 at Giant Music in Falls Church by a teenage Harry Ryan, played in a Northern Virginia band, and stored for decades under Harry’s bed before he decided to auction it. 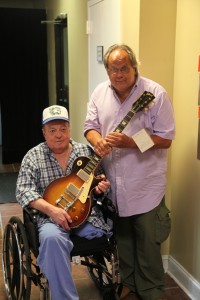 “I don’t recall ever buying one that I knew was bought new at a store in the D.C. area,” Gil said. “Of all the ones I’ve bought — and I’ve bought them all over the world — just to buy one that had that localness really turned me on.”

A self-described “guitar pinhead,” Gil has been getting turned on by vintage musical gear since he was a 10th-grader at Walt Whitman High School in Bethesda. He’d mow the occasional lawn or shovel snow for cash, then peruse the teen swap column in the Evening Star newspaper. One day, Gil noticed that someone was selling a Fender Tremolux head — part of a guitar amplifier — for $50, half of what that typically went for. He bought it, then sold it for $90 — his first transaction.

Every penny Gil made was reinvested in guitars to flip. He was “a guitar shark” after that.

“I was always just a psycho,” he said. High school friends would ask whether he would be going to that weekend’s kegger, and he’d have to tell them, “No, I gotta go to Baltimore to get this blue [Gibson] SG.”

There was a time when vintage guitars went for crazy money, sold to baby boomers flush with cash and eager to emulate their rock-and-roll heroes. Mint condition Les Paul Sunbursts were fetching close to $400,000. Then in 2007, the bottom fell out of the market.

“Everybody was so heartbroken,” Gil said. Not him.

“Not that I didn’t lose money on about 150 guitars. I sold guitars for eight grand that I paid 15 and 16 grand for in the bubble. That was a little tiresome. But I was thinking: ‘You know what? Too bad the bubble broke. But I’m only in it for 50 bucks.’

“I paid 50 bucks for the Tremolux head, and I never took a job after that.”

Gil has a coincidental connection to the Les Paul’s previous owner. His mother, Dorothy, and sister, Barbara, both worked at the Army Map Service, where Harry Ryan worked.

Gil’s new purchase has a few issues. The original pickups were removed, and the frets are worn down. Gil will fix that. In the manner of an art restorer, he will take fret wires from a 1959 or 1960 Gibson Melody Maker guitar — he owns about 45 — and transplant them to the Les Paul.

And he owns guitars equipped with the desirable “Patent Applied For” humbucking pickups that were originally in the Les Paul but were swapped out years ago.

When he’s done all that, the guitar will sing again.