Written by David Quinn on February 16, 2016. Posted in Media 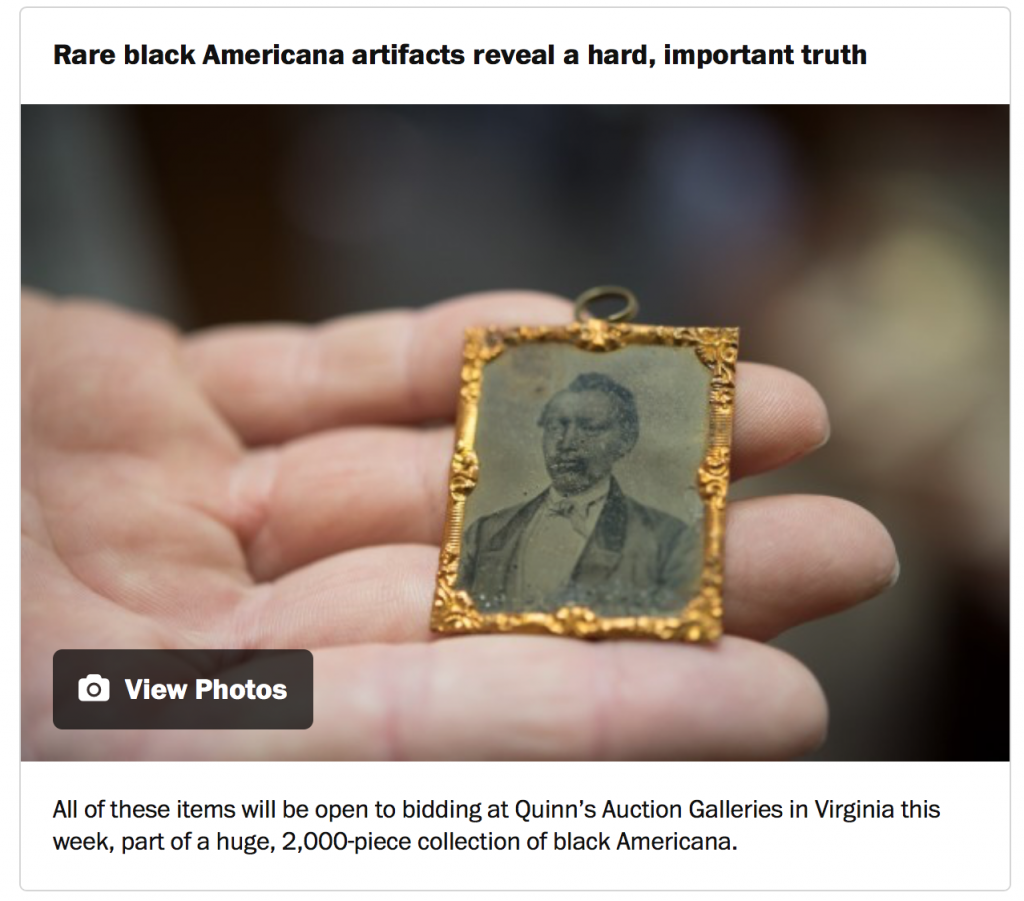 One look and you gasp.

There’s a postcard from Dover, Del., of a shirtless black man being whipped in front of a crowd of white boys and men.

“THIS IS THE WAY WE DO ’EM UP HERE,” the sender wrote on the back, amid the more standard postcard pleasantries of 1938.

There are heavy, iron handcuffs and their double-sided key.

A branding rod with the letter J. Both used on humans.

And there is sheet music for a jaunty tune called “There’ll Never Be A Coon Sit In The Presidential Chair.”

All of these items will be open to bidding at Quinn’s Auction Galleries in Virginia this week, part of a 2,000-piece collection of black Americana.

It’s a trend in the collecting world — buying up these Aunt Jemima cookie jars, pieces of the human slave trade and literature from our country’s shameful past.

Some people buy them to get them out of circulation, to prevent the children of today and adults of tomorrow from ever seeing the way we treated other humans. And to keep racists from having palpable totems of their twisted beliefs.

When Matthew Quinn, executive vice president of the auction house, asked his webmasters to post the collection they said, “ ‘We can’t post this stuff,’ ” he told me. “I told them we have to. This is our history.”

Yes, it’s our history — and it’s awful. But there’s one important lesson to history: We must never forget it.

And I’m not just talking about never forgetting the Big Baddies — plantation owners, human slave traders and the like. It’s easy to believe we’re nothing like them.

The items that are part of this collection — the caricature salt and pepper shakers, the cereal trading cards of awful slave scenes that kids got with their breakfast, the Currier & Ives prints ridiculing black Americans that were displayed on the walls of the turn-of-the-century everyman like Thomas Kincade prints are hung today — remind us how accepted such bile had been.

Racism ran — and still runs — through every thread of society.

“You can’t talk about it enough,” said Jacob B. Johnson III, the antiques dealer and appraiser who brought the collection to Quinn’s. “As a society, we can’t ever forget.”

Johnson was friends with the collector, Howard Wolverton, a New Jersey high school history teacher who used the memorabilia as part of his curriculum.

“He was a white man who believed in teaching American history — all of it,” Johnson said.

Ignoring how casually America ridiculed and belittled black Americans — from household products with the N-word in the name to home decor that celebrated slavery — isn’t telling the whole story, Wolverton believed.

And his collection is an amazing, cross-class indictment of America’s original sin.

“None of this was made to be collected,” Quinn said. “Whether we like it or not, it’s American culture on display.”

And along with the despicable, the collection has the celebratory, which itself becomes sad.

Wolverton, who died in 2005, had what may be the only surviving tintype — like a metal photo — of William Tillman.

Never heard of him?

That’s part of America’s racism, too.

Tillman was one of the Civil War’s great maritime heroes. He was a steward and cook aboard the merchant schooner S.J. Waring when it was boarded by confederate privateers. Being the only crew member allowed to walk freely (they needed his help), Tillman staged a one-man attack in the dead of night to kill the pirate captain and turn the ship around, back to New York.

His valor got him a $6,000 reward from the government, newspaper accolades and a spot in P.T. Barnum’s show, where he regaled his heroism.

If a white man pulled that kind of coup, we’d be driving on roads named after him.

There’s also plenty of original material from Thomas “Blind Tom” Wiggins, the musical prodigy who composed “The Battle of Manassas” and wowed Americans, including Mark Twain, with his astonishing musical genius. He could perfectly mimic any sound, he learned Beethoven’s 3rd Concerto in one afternoon, then played the entire piece with his back to the piano — treble with his left hand, bass with his right. In his shows, he would play “Fisher’s Hornpipe” with one hand, “Yankee Doodle” with the other, all while also singing “Dixie.”

Never heard of him either?

And how different, really, is the 1938 public whipping in Delaware from the videos we see on a regular basis of black Americans beaten, harassed and killed by police officers today? Or the racist song of Oklahoma frat boys — “There will never be a N-word in SAE”? Or the Arizona girls who thought it would be funny to spell the N-word out on their T-shirts? We’ve already forgotten.